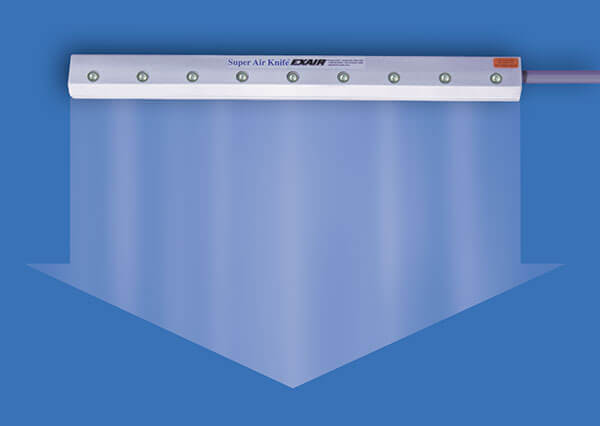 Product in the Shop

What is the Super Air Knife?

The Super Air Knife is the latest generation of air knife that dramatically reduces compressed air usage and noise when compared to other blowoffs. The Super Air Knife offers a more efficient way to clean, dry or cool parts, webs or conveyors. It delivers a uniform sheet of laminar airflow across the entire length with hard-hitting force.

Noisy blowoffs become a whisper when replaced with the compact Super Air Knife. Even at high pressures of 80 PSIG (5.5 BAR), the sound level is surprisingly quiet at 69 dBA for most applications! Amplification ratios (entrained air to compressed air) of 40:1 are produced. The Super Air Knife meets OSHA dead-ended pressure and noise requirements. 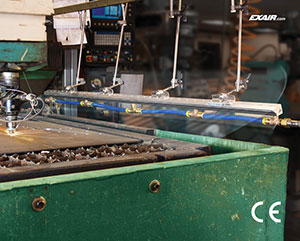 How the Super Air Knife works

Compressed air flows through an inlet (1) into the plenum chamber of the Super Air Knife. The flow is directed to a precise, slotted orifice. As the primary airflow exits the thin slotted nozzle (2), it follows a flat surface that directs the airflow in a perfectly straight line. This creates a uniform sheet of air across the entire length of the Super Air Knife. Velocity loss is minimized and force is maximized as the room air (3) is entrained into the primary airstream at a ratio of 40:1. The result is a well defined sheet of laminar airflow with hard-hitting force and minimal wind shear. 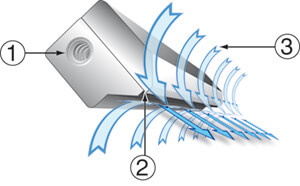 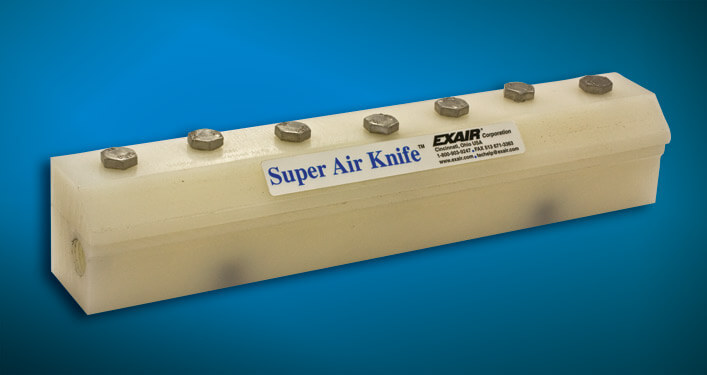 There are a variety of ways to blow the water from the bottles shown in the photo, but which method is best? The following comparison of drilled pipe, flat air nozzles, a blower and the Super Air Knife proves that EXAIR has the best choice for your blowoff, cooling or drying application.

Our goal for each of the blowoff choices was to use the least amount of air possible to get the job done (lowest energy and noise level). Compressed air pressure required for each was 60 PSIG (4.1 BAR) which provided adequate velocity to blow the water off. The table below summarizes the overall performance. Since your actual part may have an odd configuration, holes or sharp edges, we took sound level measurements in free air (no impinging surface).

This common blowoff is very inexpensive and easy to make. For this test, we used (2) drilled pipes, each with (25) 1/16″ (1.6mm) diameter holes on 1/2″ (13mm) centers. As shown in the test results below, the drilled pipe performed poorly. The initial cost of the drilled pipe is overshadowed by its high energy use. The holes are easily blocked and the noise level is excessive – both of which violate OSHA requirements. Velocity across the entire length was very inconsistent with spikes of air and numerous dead spots.

As shown below, this inexpensive air nozzle was the worst performer. It is available in plastic, aluminum and stainless steel from several manufacturers. The flat air nozzle provides some entrainment, but suffers from many of the same problems as the drilled pipe. Operating cost and noise level are both high. Some manufacturers offer flat air nozzles where the holes can be blocked – an OSHA violation. Velocity was inconsistent with spikes of air.

The blower proved to be an expensive, noisy option. As noted below, the purchase price is high. Operating cost was considerably lower than the drilled pipe and flat air nozzle, but was comparable to EXAIR’s Super Air Knife. The large blower with its two 3″ (76mm) diameter hoses requires significant mounting space compared to the others. Noise level was high at 90 dBA. There was no option for cycling it on and off to conserve energy like the other blowoffs. Costly bearing and filter maintenance along with downtime were also negative factors.

The Super Air Knife did an exceptional job of removing the moisture on one pass due to the uniformity of the laminar airflow. The sound level was extremely low. For this application, energy use was slightly higher than the blower but can be less than the blower if cycling on and off is possible. Safe operation is not an issue since the Super Air Knife cannot be dead-ended. Maintenance costs are low since there are no moving parts to wear out.

The target for each blow-off device was to consume the least amount of air possible to perform the task (at the lowest energy and noise levels). The required air pressure for each device was 4.1 bar inlet pressure, (60 PSIG), at which an adequate speed was provided to blow the water off. The table below summarizes the general performance. Since the workpiece you are actually about to blow off may have an irregular structure, holes or sharp edges, the noise level measurements were made in free air (without hitting a surface).

*Based on national average electricity cost of 8.6 cents per kWh or 3 cents per standard cubic metre. Annual cost reflects 40 hours per week, 52 weeks per year.

Many lengths available from stock in four materials:

The Air Knife Mounting System is used to provide secure, precise positioning for any of the Exair Air Knives. It can be mounted on the top or bottom of most Air Knives (Super Air Knife, Standard Air Knife). The Mounting System has a durable, stainless steel construction that is suitable for a variety of industrial applications. 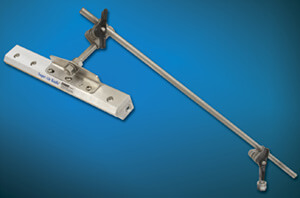 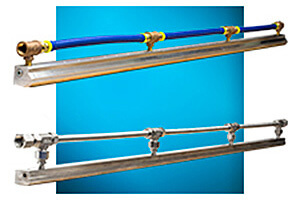 Some applications require a Super Air Knife that is longer than our 108″ (2743mm)length. Coupling Bracket Kits that join two Super Air Knives together are available. The kit includes two rigid plates along with the assembly screws. 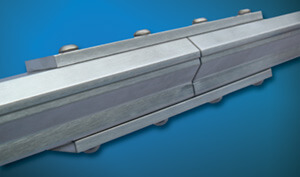 The Super Air Knife includes a 0,05mm installed Shim and is for most applications suitable. Some applications need higher force and flow. Force and flow can be increased by installing additonal shims that open the air gap. 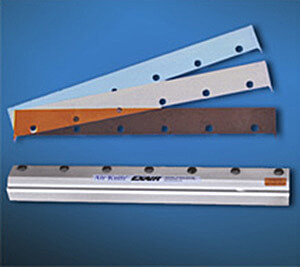 What kind of temperature resistance due air curtains offer?

*Temperatures above 427 °C can cause intracrystalline corrosion which obstructs the air gap.

Why is the Air Knife’s (air curtain’s) airflow not uniform/laminar?

Our Air Knives are designed to deliver a uniform/laminar airflow from the outset. If this is not the case, there may be some soiling on the inside of the Air Knife. Please open and clean the Air Knife following the operating instructions.

For lengths of more than 18″, the air knife must be fed via multiple compressed air inputs (up to 6 inputs depending on the length) in order to ensure a uniform airflow. In the case of the PVDF Air Knife, the material can also cause changes in the homogeneity of the airflow.
A guide for restoring a uniform airflow is available here.

Is a hole not enough? Why should I use air curtains?

Did you know that a single 3-mm hole consumes as much compressed air as a Super Air Knife model with a length of 152 mm (6″)? Additionally, an air knife offers a low noise level (below 70 dBA given an unobstructed blow-off path) and does not have a dead end (safety at work).

The amortisation period if you replace holes with optimised blow-off nozzles is less than 6 months.

Can the compressed air products be operated with water?

To be able to answer this question, we need to investigate the specific use case. For example, the Super Air Knife could be operated with water to cool a workpiece or flush away loose residues. Experience shows that the water jet initially has a uniform outflow and then eddies further away from the air curtain. This means that use with water is possible.

If you need 360 ° wetting with water, we recommend our Super Air Wipe annular nozzle. The input pressure is up to 2 bar.

Of course, we also have legacy atomiser nozzles in various designs in our portfolio. They are suitable for cooling, washing, wetting, moistening, lubricating, etc.

We are happy to advise you on the right choice of product.